I have to warn you of all of three facts before I start this review.  The more sensitive among you may wish to sit down first.

Are you sitting comfortably?  Right.

First, I should state that - for what my opinion is worth - this issue is probably the best chapter of Cross Roads.  Whereas most of the comics making up this mini-series were awful, this one is merely average.  I usually have higher standards than "does not offend me by existing" but after the adventures with Rival and Deathstroke I can deal with something that is merely mediocre.

Next, I should tell you that this comic was written by Doug Moench.  Now, don't try and get up, you Linkara fans out there!  Despite the stories Linkara reviewed in the past, most of Moench's output at DC Comics was pretty good.  At the time this story was released, he was the writer on Batman and was in the middle of Knightfall.

Finally, I should note that while Jim Aparo did the finished pencils for this issue the actual layouts were done by the infamous Jim Balent.  Sit back down, Linkara fans!  Rest assured that while Jim Balent may have designed the action of this issue, special guest-star Catwoman (whose book Balent was the artist on at the time) will have a relatively realistic figure.  Well, realiistic may not be the word for it but at least Selina Kyle does not appear to be smuggling bowling balls in her bra.

So with all that said, let's look at the cover of Green Arrow #86. 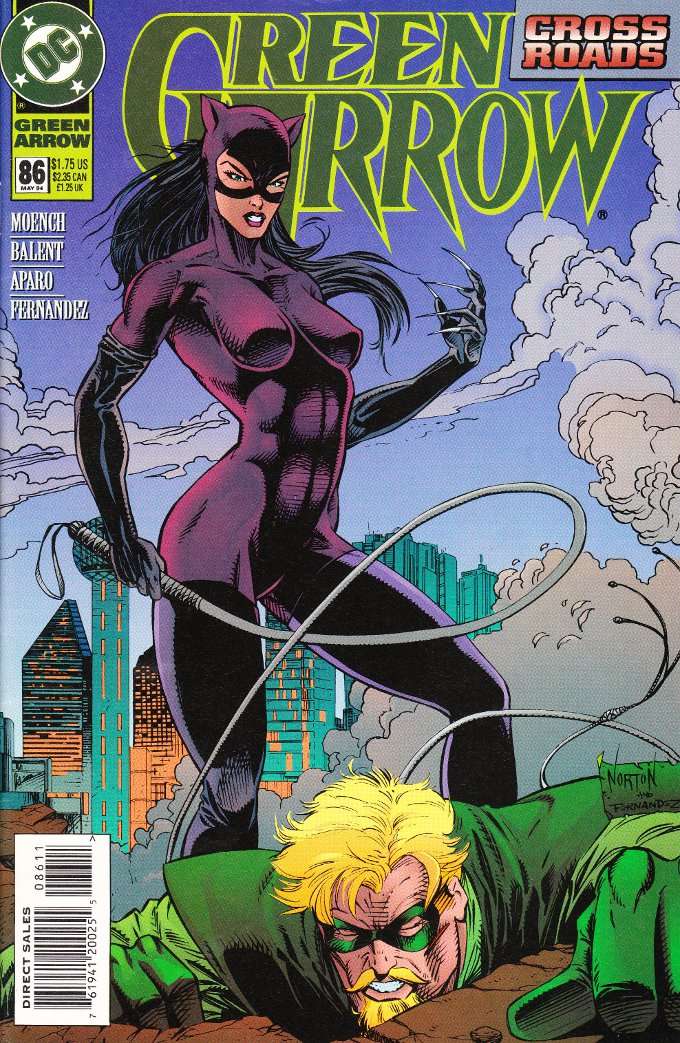 A woman in a cat costume is beating up men in downtown Dallas? Is it A-Kon Weekend already?

The cover's not that bad, ignoring that the Dallas skyline does not look like that from any angle.  At least, not any angle where there would be a building high enough to have those buildings in profile.  Still, I'll give the cover artist credit for doing a decent job of capturing Reunion Tower in accordance with The Eiffel Tower Effect.  I'll give further thanks to Jim Aparo for not portraying anyone wearing a Stetson or riding a horse anywhere in this book as opposed to, oh every other portrayal of Dallas in the media.

Our story begins in the thick of it, with Ollie fighting a group of thugs in a museum basement, using fossilized bones as a makeshift club.  Primitive even by Ollie's standards?  Yes, but there is a reason for it as we discover when Ollie begins to flashback to earlier in the day and how he came to be here without his bow and quiver... 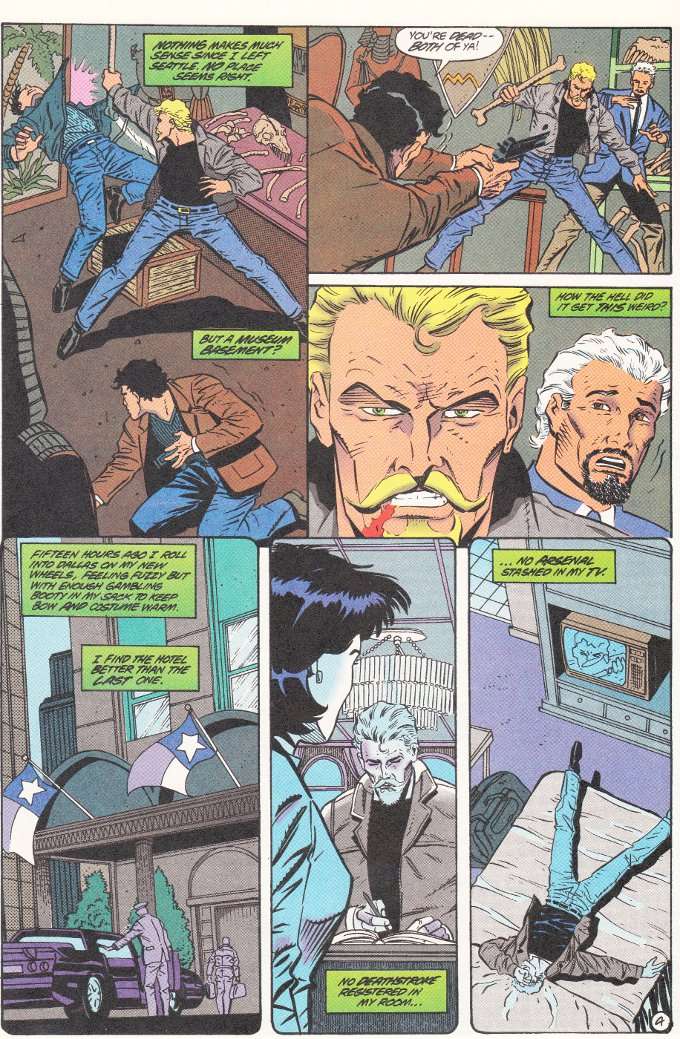 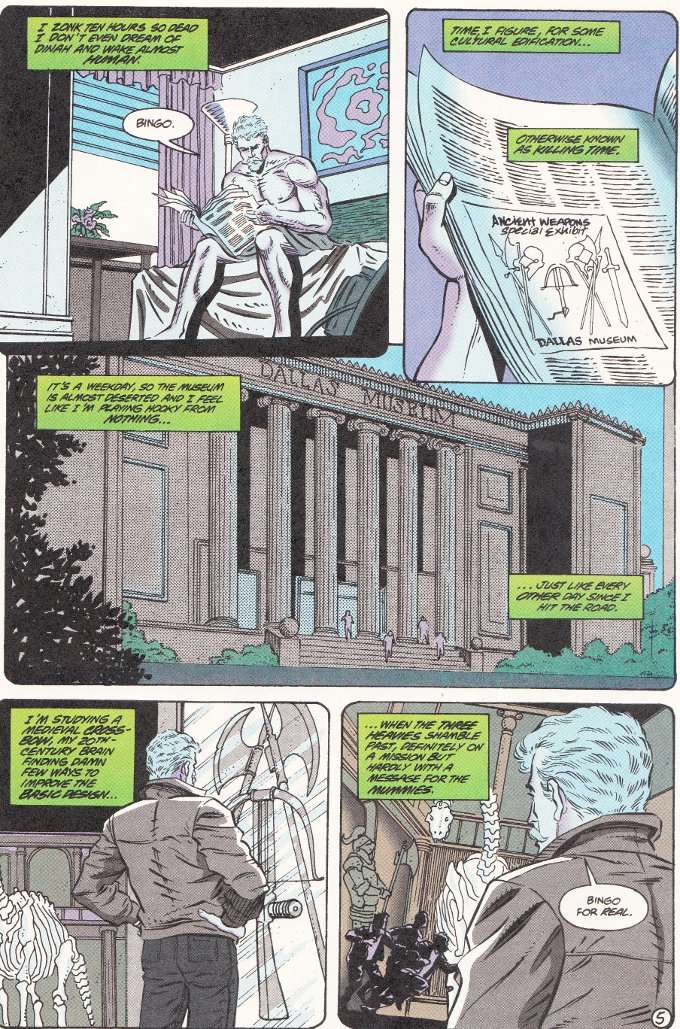 The Dallas Museum - We Only Have The One.

I should note at this point that there is no museum in Dallas that is just known as The Dallas Museum.  There's a LOT of museums in Dallas and they're all pretty specific in their focus to the point that I can't think of one that would have both a display of medieval weapons AND dinosaur bones.  However, I'm willing to write this off as one of those incidents where the DC Universe may have landmarks that the real world does not.  So now that I have defended the intellectual honor of my hometown, let's move on.

Ollie's bump-of-trouble proves correct and he follows the three thugs into an Employees Only area, where he walks in on them accosting the curator.  They say they were sent by a man named Strait just before Ollie starts unpacking a can of whoop-ass.  And that brings us back to where we originally came in, as Ollie tackles the curator out of the way when one of the heavies pulls a gun, knocking over a shelf-full of bones and - somehow - scaring the thugs off with the sudden commotion. 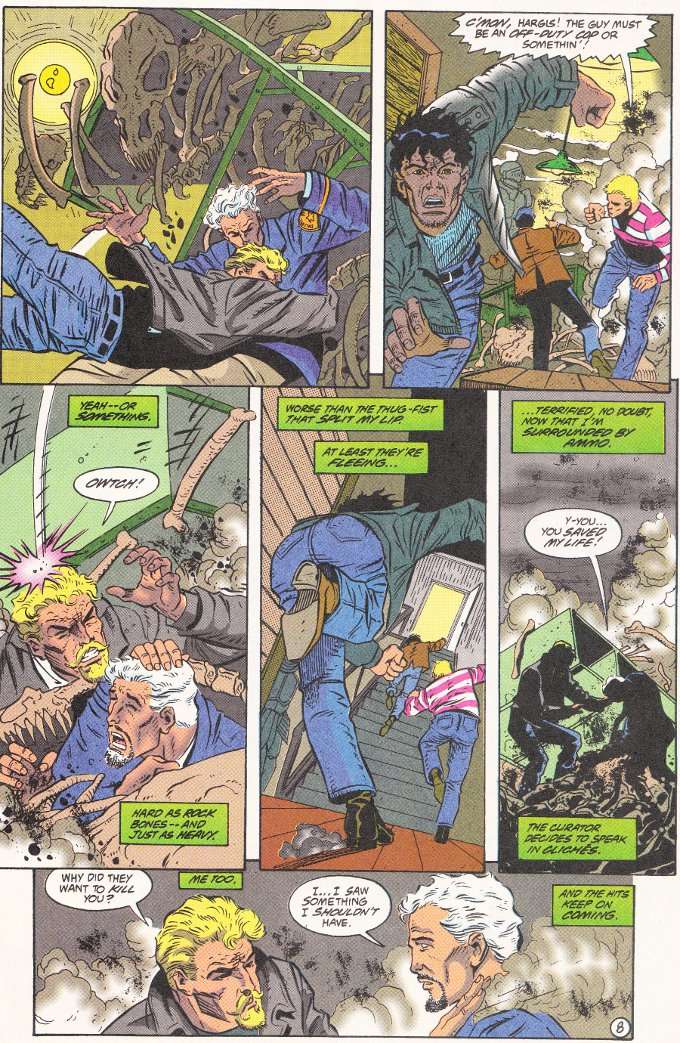 Remember The Green Arrow Drinking Game, kids!  Do a shot every time Ollie is hit in the head!


The curator is oddly unconcerned about the untold millions in damage Ollie's stunt just caused - dinosaur bones are not cheap!  Instead of chewing Ollie out or asking how he's going to pay for all this, he instead takes Ollie back to his office and explains that the three men work for Lyle Strait - a local antiques dealer who specializes in pre-Columbian South American artifacts.  Or as Ollie succinctly puts it "Inca stuff".

The curator explains that the Peruvian government's restrictions on the trading of "Inca Stuff" has made it difficult for antique dealers to acquire pieces that museums would be interested in.  Naturally he was astonished when he stopped in Strait's shop and saw a set of the most well-preserved Incan figurines he'd ever seen.  When Strait emerged from his backroom, he was carrying a gun and seemed jumpy, though he had an explanation when confronted about the figures... 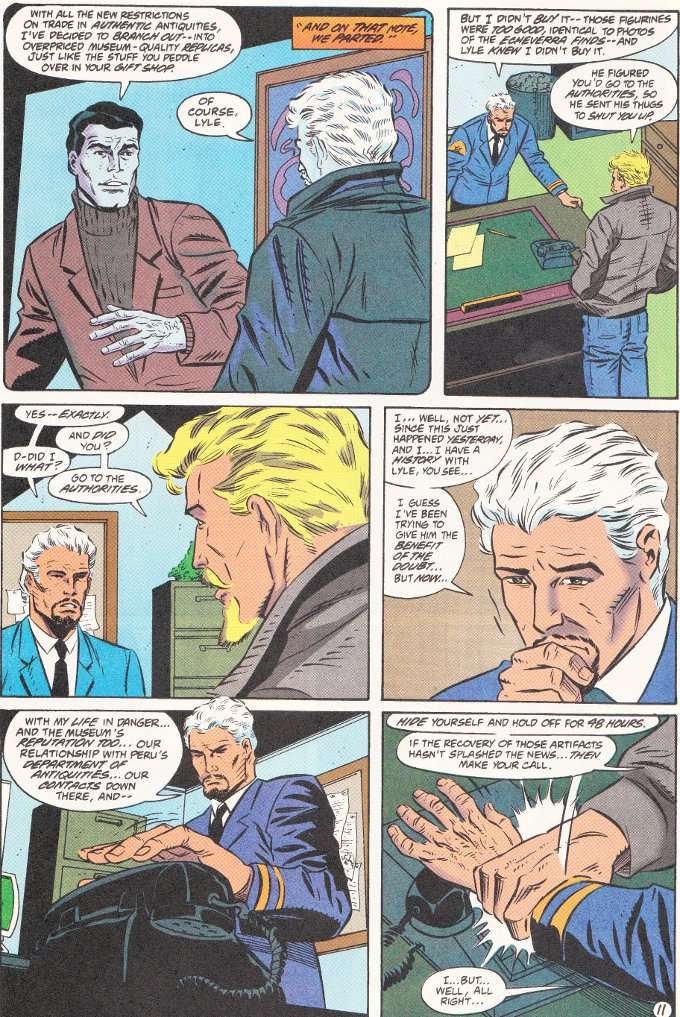 We can't just call the cops! If we do, then we don't have a second or third act to this story!

Ollie persuades the curator (whose name we find out is Ben in the flashback, though he never tells his name to Ollie) to wait two days before calling the cops.  Why?  Because Ollie wants a shot at busting the thugs himself.  Ollie follows Ben's rather vague description that Strait's shop is "on Houston Street, near the Stemmons Freeway" after failing to get the name of the store or directions.

These directions are less helpful than you'd think as Stemmons Freeway is I-35 and Houston Street runs semi-parallel to it through most of the West End of downtown Dallas.  Regardless, Ollie eventually finds what he thinks is the place.  He's about to sneak in through the skylight when his hand is snagged by a certain felonious feline femme fatale. 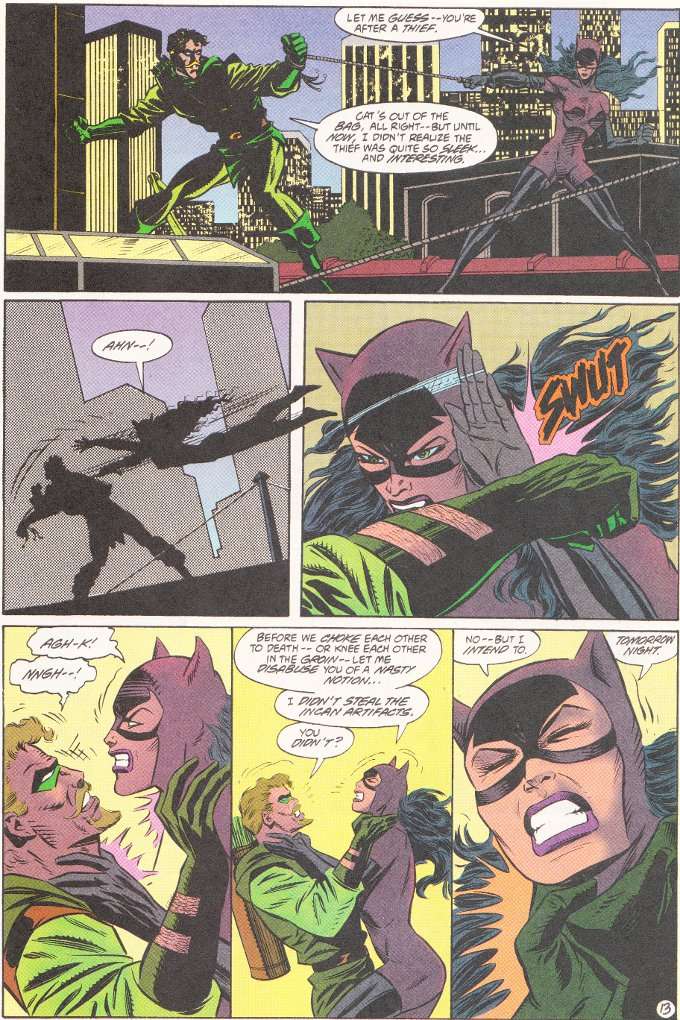 Huh.  I never noticed before that Catwoman color-coordinates her lipstick to her costumes.

Catwoman explains that she isn't involved with the thieves Ollie is looking for but she is planning to steal the artifacts from Strait.  Indeed, the only reason she hasn't broken in yet is that a thief named Chacon - the smuggler who has been stealing the artifacts for Strait to resell - is supposed to deliver a prize artifact tomorrow night.  She further explains that she's been hired by the Peruvian government to recover the artifacts.  Ollie, not being a complete idiot, doesn't buy her story completely but does suggest that they should stop strangling each other and start working together since they're both out to stop the same smuggling operation.  And that brings us to the reason why most Catwoman fans either quietly ignored this story or complained about it loudly. 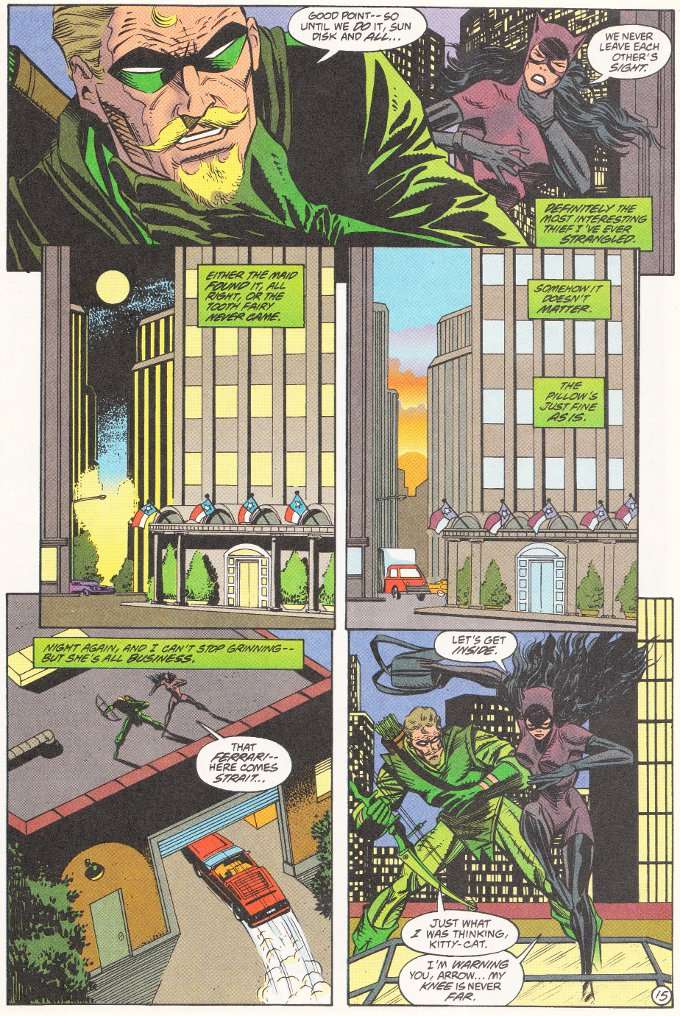 I guess there's ONE thing Green Arrow did before Batman. *rimshot*

Yes. This happened.  Ollie and Selena apparently have a one-night stand, for want of anything better to do while keeping an eye on one another to make sure the other one doesn't run off and steal the Incan artifacts from Strait on their own.  I can't honestly say this wouldn't be out of character for Ollie because... well, he's single now, he has a thing for sarcastic brunettes and... IT'S CATWOMAN!  Why Selena sleeps with Ollie is a bigger mystery, though this doesn't seem nearly as disrespectful to the character as the first issue of the New 52 Catwoman book.

Anyway, the two sneak in to discover Chacon's men pulling their guns on Strait.  Seems they've been made a better offer by a new business partner, who means to put Strait out of business... permanently!  And this mysterious new business partner?  None other than... the curator Ben Boguns?!. 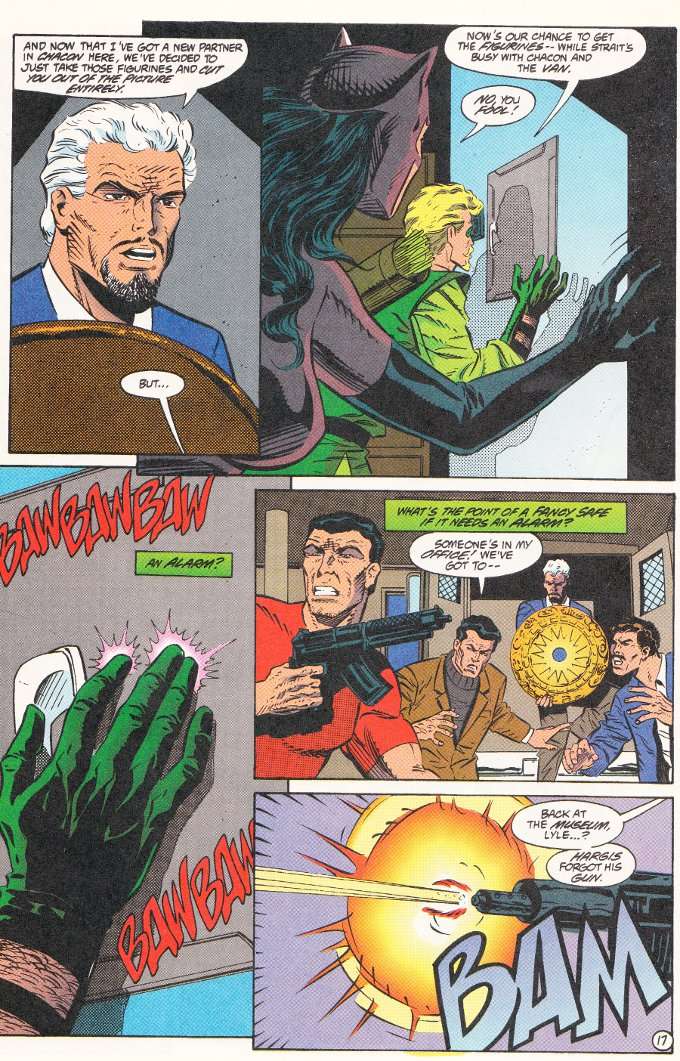 This is why you always let the rogue search for traps first. Newb!

The alarm doesn't deter Boguns from gunning down Strait, using a rifle aimed through the hole in the Sun Disk, though he does send some thugs to see what's going on.  Ollie does his best to hold them off while Catwoman cracks the safe.  With the figurines secured, that leaves only the sun disk to recover.  Unfortunately, it's at this point Strait's men come to see what the shooting was about and all hell breaks loose as Chacon and Boguns hop in their van and make a break for it. 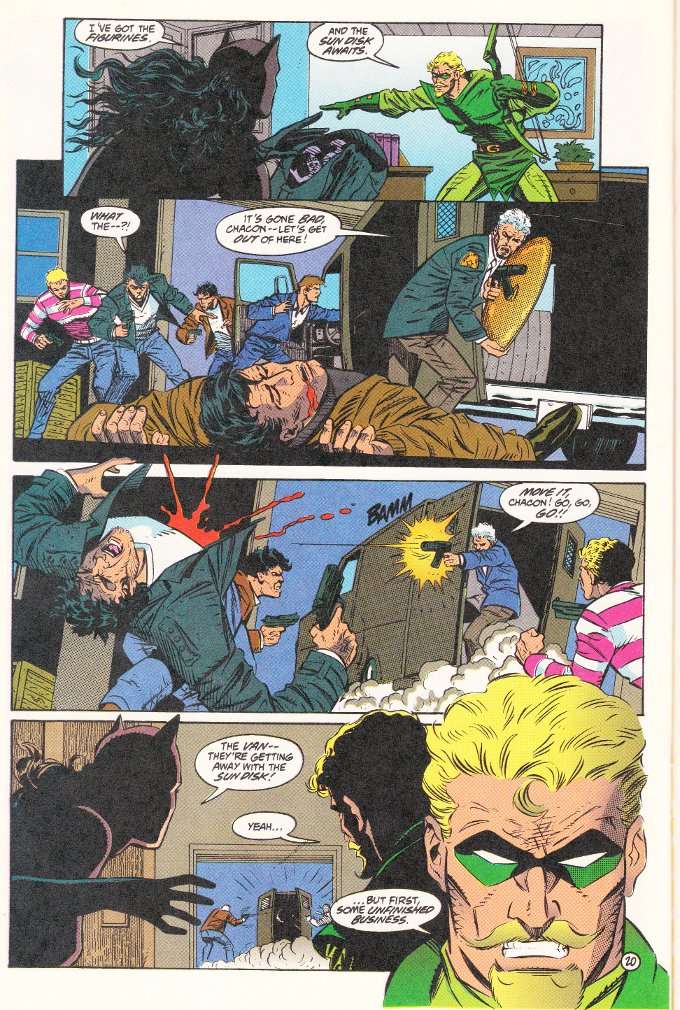 Judging by Ollie's expression, the unfinished business involves a sudden need for a restroom.

After retrieving the keys from Strait's body, Ollie and Selena give chase using Strait's own Ferrari.  Boguns tries to shoot at them, using the Sun Disk as a shield.  But as Boguns quickly learns, it's a bad idea to use a circular object with a hole in it as a shield - particularly against the world's finest archer.

You can already guess where this is leading, can't you? 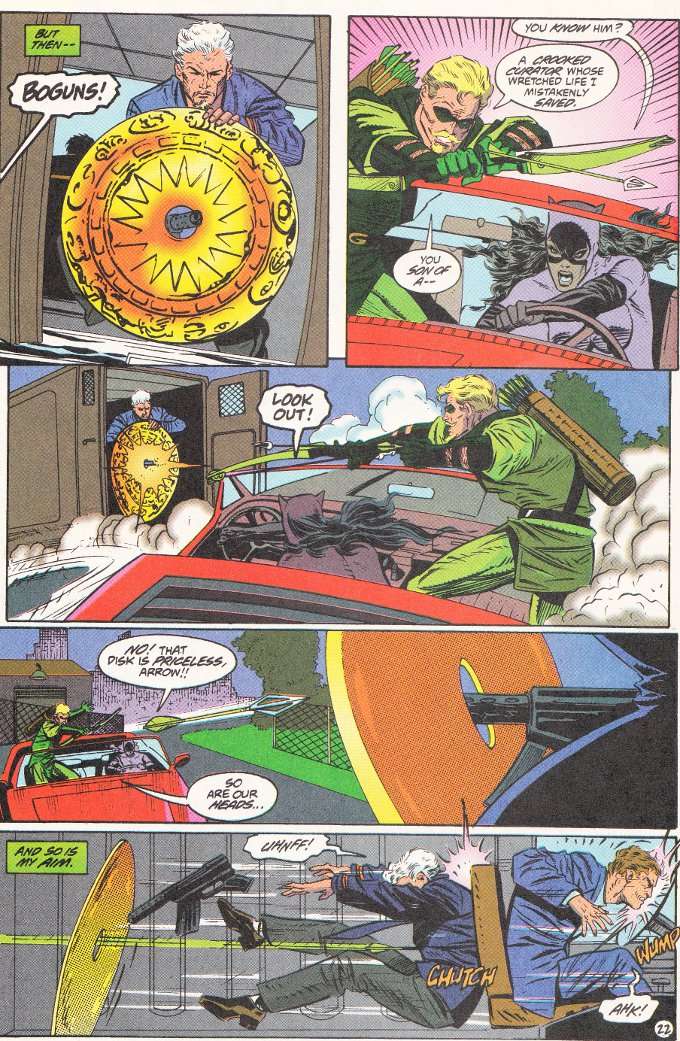 Nooooo! Who would have thought he'd trained to shoot a small circle in the center of a big circle?!

The disk goes flying but somehow Ollie manages to snag it, making a one-in-a-million running catch... from a moving vehicle.  Landing on his elbows.  Without breaking anything.

... how did she grab that without losing control of the car?

And so our comic ends with Ollie calling up the Peruvian Department of Antiquities, who - oddly enough - seem to have someone who speaks English answering their phone.  Satisfied that Catwoman was being honest with him and that he really was recovering stolen goods - because turning out to be a thief after killing several people the night before would be terrible - Ollie decides that he has had his fill of Dallas and that he's going to make his way to New Orleans. 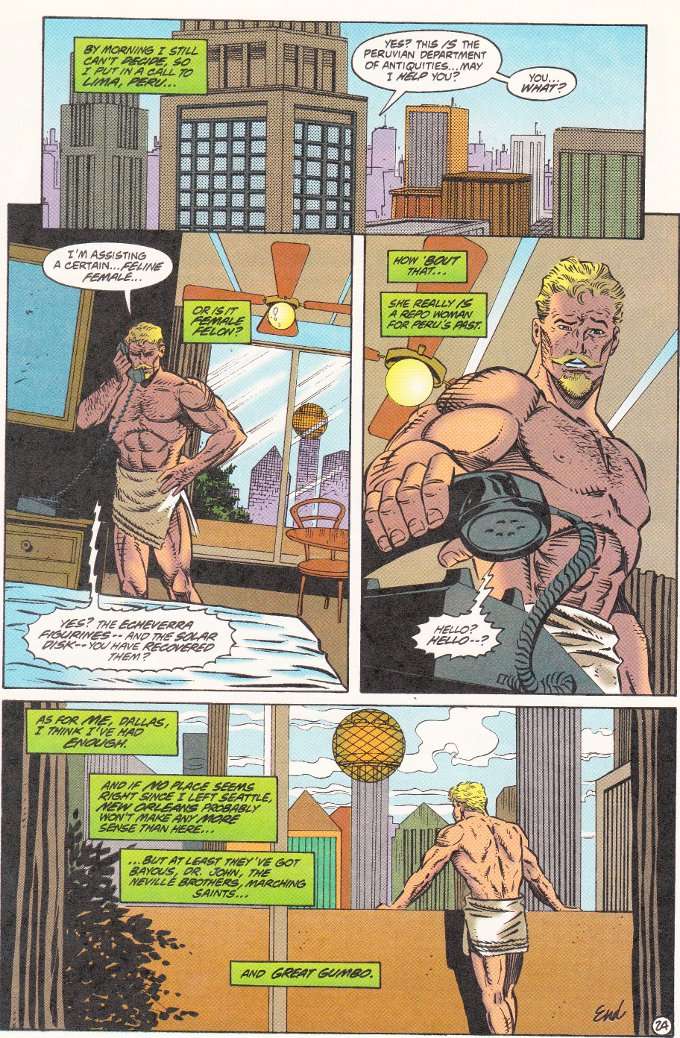 Yes, the plot is contrived.  Yes, Ollie is portrayed as being unconcerned with racking up a body count.  Yes, the sheer physics of the penultimate page is painful.  And yes... Ollie and Selena Kyle hooking up is just wrong on so many levels.  And yet, somehow, this issue works as a straight-forward action movie on paper.

There's a lot of little things caused by the characters not thinking ahead but nothing that can't be dramatically justified.  Our heroes are portrayed as being competent, apart from Ollie's not thinking like a thief when dealing with the safe.  The plot is solid enough, though the bad guy is responsible for bringing Ollie in at a moment when he should be trying to avoid attention.  And the artwork is good, making this comic readable if unlikely to get the heart racing.

The next comic we cover in Off Target will definitely get your blood pumping but not for the reasons it intends...