One of the more annoying aspects of Steven Moffat's time as the show runner on Doctor Who has been the constant return to the idea of Amy Pond having to chose between the exciting Doctor and the dependable Rory Williams.  It was false drama, for we all knew that The Doctor had nothing to offer Amy apart from adventure and Rory proved his worth to Amy time and time again.  Paradoxically, one of the best aspects of the show from this time was Rory Williams attitude toward The Doctor, which was heightened by the same conflict.  Rory was an everyman with an attitude, ready to snark at The Doctor whenever something went wrong (which it frequently did) and more than willing to puncture a hole in The Doctor's pomposity.

Writer Brandon Seifert - best known for his self-published horror/medical comic Witch Doctor - explores this conflict in this, the first part of The Doctor And The Nurse.  After their latest adventure results in everyone coming even closer to death than usual, Rory and The Doctor nearly come to blows.  Amy concludes that her boys need some quality male-bonding time without her getting in the way. 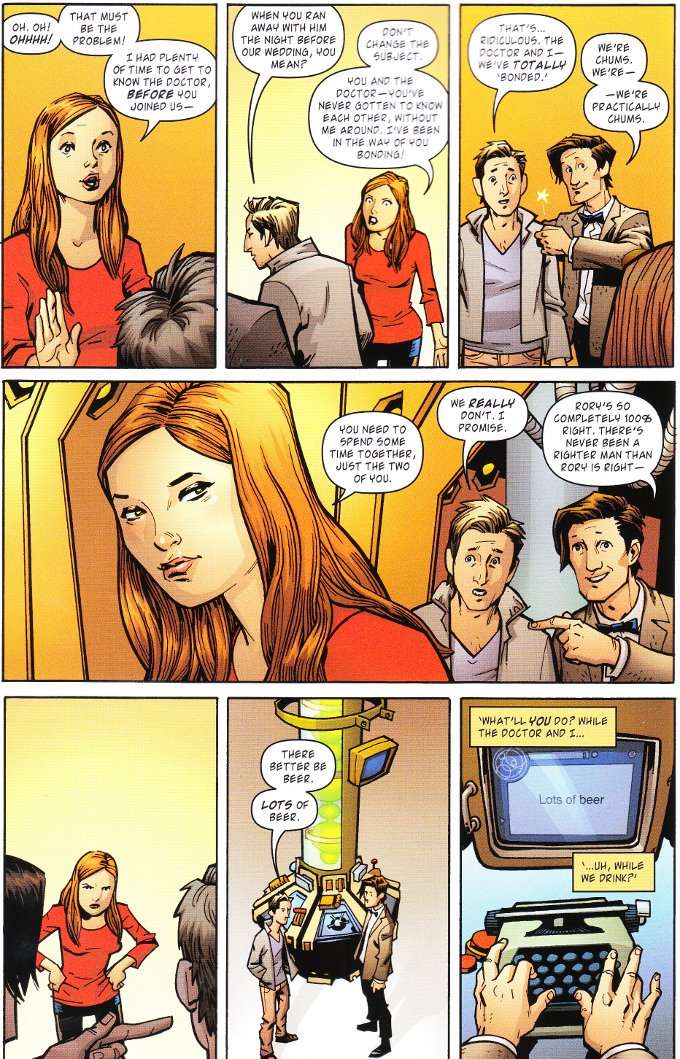 Naturally, because this is a Doctor Who comic, things don't go quite that smoothly.  Amy's plan to enjoy some alone time in the relatively quiet year of 1814 are put on hold after she notices an agent of The Silence walking about and decides to investigate it herself.  And The Doctor and Rory, mutually agreeing that this male-bonding stuff is a bunch of bollocks, decide to jump ahead a few hours in the TARDIS before Amy gets back from her walk.  This results in a series of adventures involving tuxes, moon landings and prehistorical animals as Amy's boys try to get back to the right time.

Seibert's script is as delightfully mad and light on logic as anything you'd expect to see on the regular Who series under Moffat's tenure.  One can almost hear the crazy montage music that plays whenever we see The Doctor running through several time periods in rapid succession, as we see him and Rory poking their head out of the TARDIS and trying to figure out where they are.  Never mind that the TARDIS instruments should easily enable The Doctor to know where and when they've landed or the fact that Amy is able to wander around Dickensian London in her trademark mini-skirt without being arrested for indecent exposure.  This story is pure fun and there's no time to worry about such logical plot holes when you get to see Rory Williams smacking a saber-tooth tiger across the face with a rolled-up magazine. 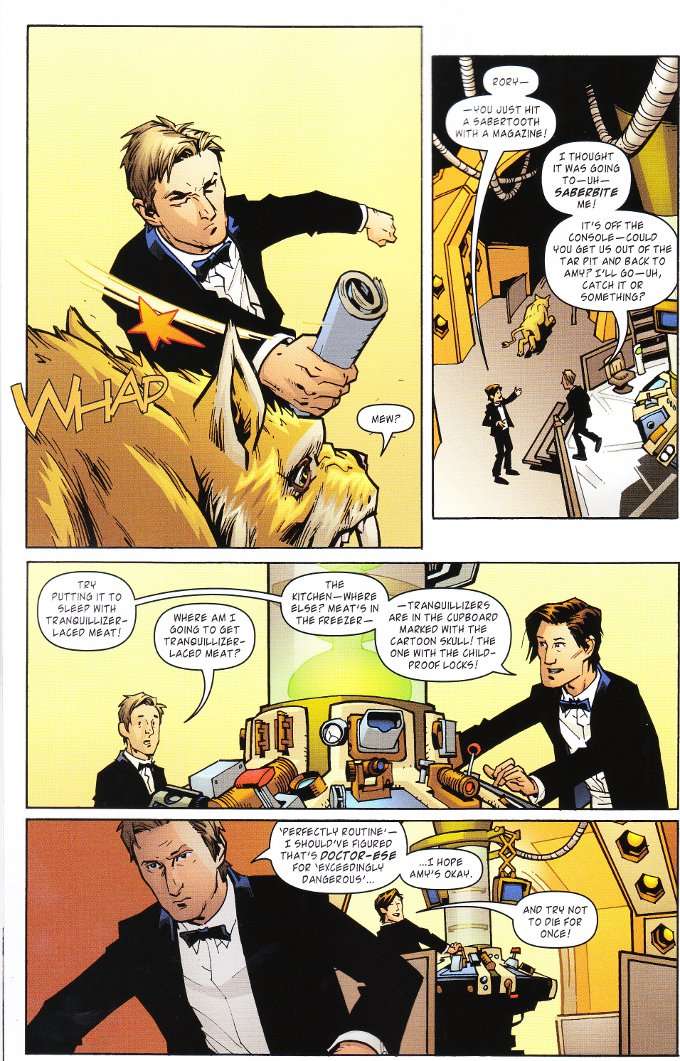 The artwork by 2000 AD artist Phillip Bond  is manic enough to match the script.  Bond does a good job of caricaturing the cast of the show, though his general style is more cartoonish than realistic.  However, given the comedic tone of the story, this proves to the benefit of the issue.  Bond is also an excellent visual storyteller and the action of the story flows smoothly from panel to panel under his pencils.

If you haven't been reading the Doctor Who comics of late, this is a grand time to jump on!
Posted by Starman at 9:10 PM