Blood and Thunder, Have The Gods Gone Mad? 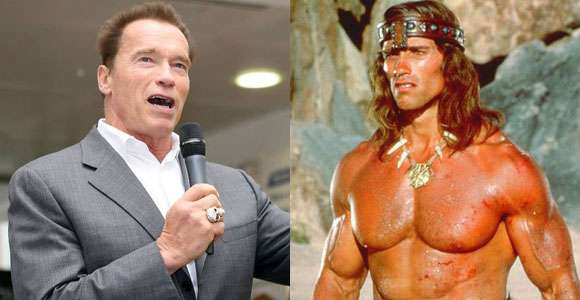 Okay.  Flawed though last year's Conan The Barbarian starring Jason Monoma might have been, was there anyone who understood that Conan existed as a character before 1980 seriously thought "What this movie needs is more Schwarzenegger?"

Apparently so.  Because they are now planning a movie based around Conan's days as King of Aquilonia, starring Schwarzenegger for as Summer 2014 release.

Why do I think this is a bad idea?  Two main reasons.

1. Let me be blunt.  Arnold is showing his age and is nowhere near in the shape he was in 10 years ago, let alone 30 years ago.  He may be able to get whipped into shape before then but...

2. I'm a little concerned that the people in charge haven't seem to have put much thought into the story past "Conan's last battle". I'm also concerned about there being no nod at all to the original Howard mythos which - apart from the plot involving a magic mask that Cimmerian's had a hand in guarding the shards of - the 2011 film was fairly faithful to.
Oh well.  They've been talking about a Conan The King movie for years.  Hopefully it will continue to remain in the same development hell as the  Rose McGowan Red Sonja movie.