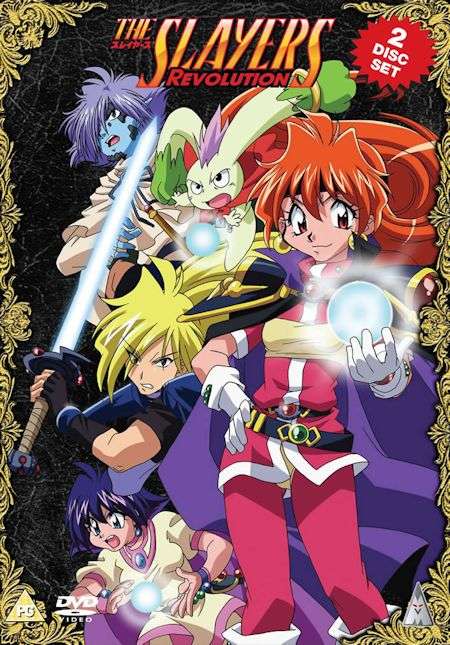 According to Lina Inverse, she is the most stunning, beautiful, wise, powerful, and indescribable sorceress adventurer in the world. According to everyone else, she’s a destructive lunatic, barely preferable to the monsters she combats, with an appetite as large as her bust is small. Accompanied by her bodyguard, the stout-hearted and thick-skulled swordsman Gourry, Lina has been destroying cities left and right with her magic – all in the name of monster-slaying – for several years now. So, when a new wave of destruction washes over the land and someone starts blowing up all the state-of-the-art magical tanks several city-states have recently purchased, Lina is the prime suspect. Indeed, she’s the ONLY suspect to the mind of Inspector Wizer Freion, who is out to arrest Lina Inverse on charges of…being Lina Inverse.

Surprisingly, Lina is innocent – for once. But with Inspector Freion unwilling to investigate any other leads and actively trying to tie her into any other crime that happens around her, Lina has got her hands full staying out of jail. But a strange bunny-like creature with a zipper in his tummy and prehensile ears may be a more serious threat to Lina’s life and livelihood than the crazed cop. And there’s always a chance that Inspector Freion’s ramblings about a conspiracy organized by a criminal mastermind involving the tanks may hold some truth…

Thankfully, Lina’s not alone in trying to puzzle all this out. Along with Gourry, she’s joined in her quest to prove her innocence by some old friends, the pacifist princess priestess (try saying that five times fast) Amelia and the rock-skinned sorcerer Zelgadis. And it’s a good thing Lina has her friends, for there are enemies, old and new, watching from the shadows, waiting to strike.

Slayers Revolution is the fourth anime series (or fourth season) in the long running Slayers series. Originally started as a series of light novels in Japan in 1989, Slayers is one of the most adapted works of fiction in the world, having inspired a manga, a television series, several animated movies, a radio drama, a number of video games and a pen and paper role-playing game. Revolution was the first season of Slayers to be produced after a ten-year gap in production and FUNimation was able to get most of the original dub cast from the first three seasons back for this production.

The look of Slayers is best described as classical anime. It was one of the first series to achieve wide-spread popularity in the United States back in the 1990s and it’s easy to see why. With its mix of action and humor, the series works both as a straight fantasy epic and as a parody of traditional fantasy epics. The humor is not limited to the tropes of sword and sorcery literature, however, and just as much comedy comes from the characters as it does from the absurdity of their world. So while the Dungeons And Dragons crowd will find a lot to laugh at with this series, the more traditional otaku should enjoy themselves, too.

The series is rated PG and I think that is a fair rating. Apart from a running gag regarding the flatness of Lina’s chest and one character taunting her over it, I cannot think of anything in this series that would be considered objectionable for most audiences. Indeed, I would say the entire Slayers series is a must have for any anime collection.