The Death of Captain America, vol. 1-3 - A No Flying, No Tights Review 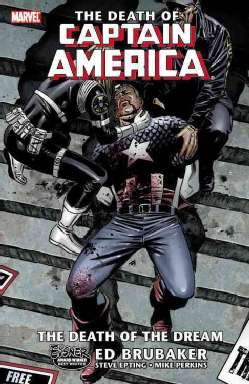 The Civil War, where superhero fought superhero over the right to not register their secret identities with the US Government, has ended. In order to stop the fighting and the continued endangerment of civilians, Resistance-leader Steve Rogers (a.k.a. Captain America) agreed to be arrested and tried for defying the law of the land. But before his trial could begin, Captain America took a sniper’s bullet aimed at one of the police officers guarding him, sacrificing his life to save another man in uniform.
Now, with a nation divided over Captain America’s status as a hero, the enemies of America are moving into action. A nefarious trio: the master hypnotist Dr. Faustus, the mad cyborg scientist Arnim Zola and the Nazi mastermind The Red Skull, have formed an unholy alliance to destroy everything that Captain America died to protect. Through organized super-villain attacks, bought politicians, and economic manipulation, they intend to collapse the American economy and take over the American government through their puppets.

But in its darkest hour, America does not stand undefended. Nick Fury. Agent 13. The Falcon. The Black Widow. All of Steve Roger’s closest friends and allies will take up his cause. And even those who fought against Rogers in The Civil War, heroes such as former Iron Man turned Director of S.H.I.E.L.D. Tony Stark, will put aside their differences to prevent everything Steve Rogers fought for from being destroyed. And in the end, another Fallen Son will take up the shield of his friend and bear the mantle of Captain America.

Because a man can die… but The American Dream lives on!

Ed Brubaker broke the unspoken rules of comics once before with his Captain America run, bringing Captain America’s sidekick Bucky back from the dead and by giving Bucky a hereto unknown secret life as a brainwashed Russian assassin called The Winter Soldier. Brubaker would break the rules again with this collection of three books, where he killed off Captain America but continued the series with the focus now upon all of Steve Rogers’ closest allies as they attempted both to cope with the loss of Captain America and an organized assault by his greatest enemies.

Be assured there is plenty of superheroic action in this series, but the focus, and the heart of the story, lies in Brubaker’s giving some thoughtful attention to characters who are too often dismissed as Captain America’s girlfriend or Captain America’s sidekicks. Never before have Sharon Carter (a.k.a. Agent 13) and Sam Wilson (a.k.a. The Falcon) received the character development they receive here. Even Tony Stark, who was about the last character anyone could feel sympathy for in the wake of Civil War, comes across as a basically good man in a difficult situation under Brubaker’s pen.

Steve Epting has created the best work of his career with this series. His artwork does not seem to be sketched so much as it was painted with a pencil. Words fail me in describing just how gorgeous every page of this series appears so I shall say only that it looks amazing and leave it at that.

The three volumes of The Death of Captain America are a must-have for any modern graphic novel collection. The writing is top-notch. The artwork is flawless. And there’s nothing that would be inappropriate for the teen-age audience the series is aimed at.