FAME: The Cast of Glee (unauthorized) - A No Flying No Tights Review 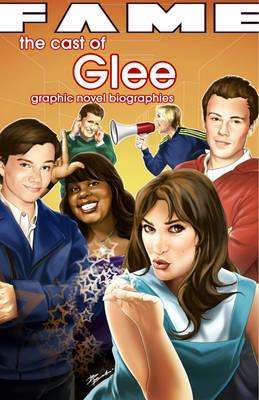 I believe there are several things I should state at the beginning of this review, in the interest of full disclosure. First, despite sharing a name with a certain popular star of stage and screen, I have no relation to “the other Matthew Morrison.” I should also note that I am not a “Gleek” – which is to say I am not a fan of the popular television series Glee. I have watched the show a few times and while the production values are good and the actors involved are obviously talented, the show is just not my cup of tea as I’ve never been a big fan of musicals. I mention this because I think it is important to note that I went into this book as a neutral party, who had no particular fondness or animosity for the TV series Glee and the actors and creative people involved in that show before I make the following statement.

FAME: The Cast of Glee is a complete failure on every level and it is easily the worst graphic novel I have read in recent memory.

Unlike previous Bluewater Productions graphic novel biographies, which featured such creative frames as Dracula telling the life story of Twilight scribe Stephenie Meyer, there is no plot to speak of in FAME: The Cast of Glee. All of our information comes from an unseen, unidentified and omniscient narrator. The book consists of a series of information dumps, which dispense random factoids on the lives of six of the actors from Glee and show-creator Ryan Murphy.

Curiously, there is quite a bit of inequity in just how the 36 pages of this graphic novel are distributed, with Chris Colfer, who plays the character of Kurt, only receiving one-and-one-half pages. I would chalk this up to his being a relative newcomer compared to many of his cast-mates, but the experienced comedian Jane Lynch only gets four pages, with one-half of one of those pages being devoted toward recreating a scene from The Forty Year Old Virgin. This seems curious to me, given that with what little I know of Glee, Kurt and Sue Sylvester are easily the two most popular characters and the two people fans of the show would like to know more about.

In terms of information, these biographies are about on par with the average biography written about a hot young star written for a juvenile or young-adult audience. One could glean the exact same information from these celebrity’s Wikipedia pages. Indeed, after a quick web search, I suspect that is exactly where writers CW Cooke and PR McCormack conducted most, if not all, of their research. I should note, however, that Wikipedia apparently has stricter guidelines for spelling and grammar than Bluewater Productions, as I found the word “lead” being used in place of the word “led” on two separate instances in FAME: The Cast of Glee.

I’m not sure what to make of the art in this book, which apparently required the efforts of an artist (Beniamino Bradi) and “Graphics” (Darren G. Davis). Apparently Bradi followed the example of his writer colleagues and turned to the Internet to find photo references for the various actors he depicts. Now, there’s nothing wrong with that – a lot of artists use photo references for their art. But many of the scenes depicted in this book appear to have been traced over from the original photo… badly. Indeed, only one thing prevents me from thinking that the art team just pulled pictures off the Internet and then used the filters in Photoshop to create their art and that is the fact that if they had done that, the artwork would look much better than it does.